In case of a fire in large and open spaces, properties that lie nearby are most threatened; usually owners are not there, the Local Fire department is not notified soon enough or the already installed irrigation system of the house is just not enough to withstand the fire front coming towards the house.
DCSIs' Fire Detection, Alarm & Extinguish system covers the need for efficient response to fires threatening a house perimeter. With a multiple system of overlapping sensors and water cannons, all controlled by a main control installed in the house and utilization of the existing piping and watering installation, the property is going to hold for as long as it takes the Fire Fighting Forces to reach the place.

The system may perform the following tasks:

Depending on the installation, the system can be customized to cover part or all of the house perimeter as well as interior areas most vulnerable to fire danger.

Each flame detector has a nominal angular sensitivity as appearing on the following sketch: 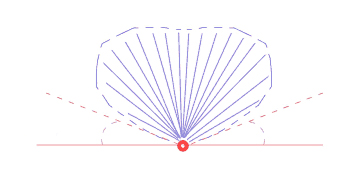 Slight Overlapping is observed in almost all areas of the perimeter 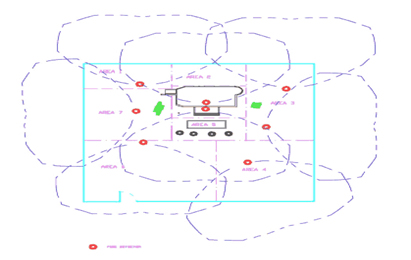 The blue area indicates the spectrum of detection for each sensor, having in mind that there are no physical obstacles and other interferences.

Different subdivision refers to subdivision in water zones. Depending on the design capacity (flow: lt/min) and the required flow required for each fire-fighting nozzle, we divide the property in zones requiring about the same lt/min water flow.

It is vital not too many nozzles to be placed on a single zone. Maximum consumption of water by simultaneous operation of nozzles shall not exceed the design capacity.

The process of selecting the number of nozzles required for a specific area as well as their location follows the frame of economy (minimum number of nozzles, minimum piping required and fewer control valves) and efficiency.

The concept requires complete coverage and overlapping of the surrounding area. Nozzles have a range of 30 – 35 meters when installed properly and in clear locations on a piping system under pressure of 5 bar.

Proper arrangement of nozzles is considered of primary importance to the efficiency of the system. 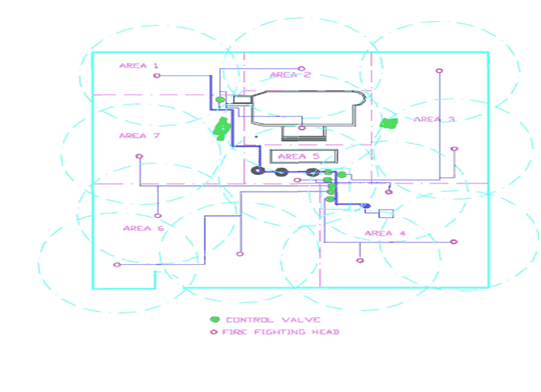 Practically may be easily accomplished by following these simple guidelines. Fire Fighting Nozzles shall be placed in a way such as that the distance between two nozzles is of no more than 25mtrs. This spacing will allow the spaying to overlap and to assure water coverage of all the desirable area.

The nozzles have an arc of coverage of 360 degrees. Sometimes it is considered essential to install a nozzle on about the centre of an area defined by surrounding nozzles.

Seven different water Zones corresponding to 7 control valves and to a maximum number of two (2) water nozzles per water zone.

Residential controllers shall be installed indoors. A 220V electrical outlet is required.